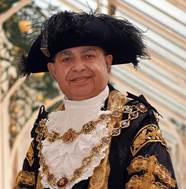 Councillor Muhammad Afzal is the Lord Mayor of Birmingham. He represents the Aston Ward on Birmingham City Council and has served as a Councillor on the Council since 1982.

During this time, he has been Chair of several Committees, including the Urban Renewal and Human Resources Committees.  He has considerable experience of senior officer appointments, human resources and industrial relation policies and practices. He has also initiated several schemes to promote equal opportunities for women, people with disabilities and ethnic minorities.

As a former Chair of the Personnel Committee, one of his major achievements was to significantly increase the proportion of women, people with disabilities and ethnic minorities in the Council’s workforce. This was achieved by setting recruitment targets and ensuring stringent monitoring.

He has also served as a Director of Birmingham International Airport.

He is a founding member and former Chair of the NABAEMC.