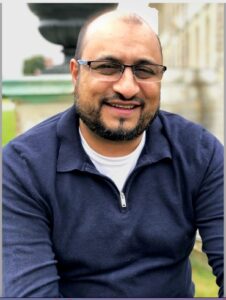 Cllr Hanif Khan, Cabinet Member for One Hounslow and Transport, represents the Hanworth Park Ward in the London Borough of Hounslow. He was elected as a Labour Councillor in 2014 and re-elected in 2018

Hanif has a strong passion for social justice. He would like to see a fairer society and those in power carry out their responsibilities equitably to build a fairer society and create peace everywhere. He headed the Race Inequalities group, which evidenced the inequalities ward by ward, creating a traffic light system to develop a new equalities strategy.

As a senior Councillor, Hanif is a key member of the Cabinet. His first job was to lead the charge on Community Protection, and he says his best achievement is reducing knife crime and reclaiming the parks for the community.

As transport lead – which includes Heathrow and some of the UK’s busiest roads, bus, tube and rail routes he leads the improvements with a radical set of policies, including workplace parking levies, LTNs, a new parking contract and public transport improvements. His approach is to put in place significant change AND build consensus. He is also leading London Mayor Sadiq Khan’s bold StreetSpace plan.